In Oklahoma and around the country, an enterprising cannabis entrepreneur could fill a bank deposit tube with marijuana, but he or she would struggle to find a bank willing to accept the cash from their business. (Ben White) 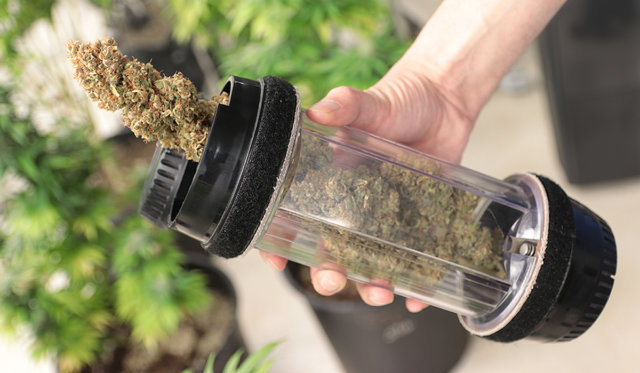 In Oklahoma and around the country, an enterprising cannabis entrepreneur could fill a bank deposit tube with marijuana,
but he or she would struggle to find a bank willing to accept the cash from their business. (Ben White)

It’s closing time at a medical marijuana dispensary in Oklahoma. In most cases, it’s like any other business. Inventory is secured. Doors are locked. The day’s receipts are tallied. But thanks to marijuana’s Schedule I status in the eyes of the federal government, that’s where the similarities end.

While most businesses take their day’s earnings to a bank, an owner of a dispensary or grow operation may struggle to do that directly because it’s illegal under federal law for any bank to take their business.

“The process of banking marijuana business in any form is illegal under federal law,” said Oklahoma Bankers Association president Roger Beverage. “As a result, most banks and most credit unions are shying away from the business, especially the direct business of growing and selling it.”

Obstacles a part of the industry

Oklahoma’s green rush solved problems for those who want to use medical marijuana to treat their ailments, but its success has created plenty of headaches for intrepid business owners looking to carve a niche in the industry.

At the end of the day, it becomes a question of what to do with all the cash. And there’s a lot of it. Oklahomans spent $18 million on medical marijuana in April alone, according to the Oklahoma Tax Commission.

“They have difficulty accessing any banking relationships, either to deposit their revenue or pay their bills,” Oklahoma City attorney J. Blake Johnson said. “And in some cases to secure financing for expansion projects or for capital improvements. In each case, it is a significant challenge.”

The trickle down effect can come from landlords who don’t want to rent space to dispensaries or grow operations because it exposes them to legal peril. In some cases, insurance companies won’t insure cannabis based businesses.

Beverage said theoretically even businesses who sell supplies to those businesses could be exposed legally under federal law.

“There are tiers of involvement,” he said. “If a company manufactures boxes to sell the product, even though they’re twice removed from any actual marijuana sales they could be at risk under the law as it is now.”

Beverage said those in the banking industry understand the dilemma.

“It creates a safety hazard,” Beverage said. “You’ve got large amounts of cash on the premises and there are people who might see that as an easy opportunity to steal it.”

First Fidelity Bank is one of the only financial institutions in Oklahoma that provides cash services to marijuana related businesses, said FFB chief administrative officer Suzanne Symcox. Those services are similar to what companies that manage ATM and vending machines need, as they also deal in large amounts of cash, Symcox said.

First Fidelity got into the business of providing services to marijuana-based businesses after the release of a memo by former Deputy U.S. Attorney General James Cole in 2013 which said the federal government would place a low priority on prosecuting those operating in states where cannabis businesses were legal.

Still, there are few financial institutions offering those services. One reason is the amount of oversight required, including the use of software that tracks each transaction. Those added costs are passed on to the marijuana-related businesses.

“There are so few providers because it requires a significant amount of oversight,” Symcox said. “Every transaction has to be monitored. What they are depositing has to be balanced with the amount they’re selling.” 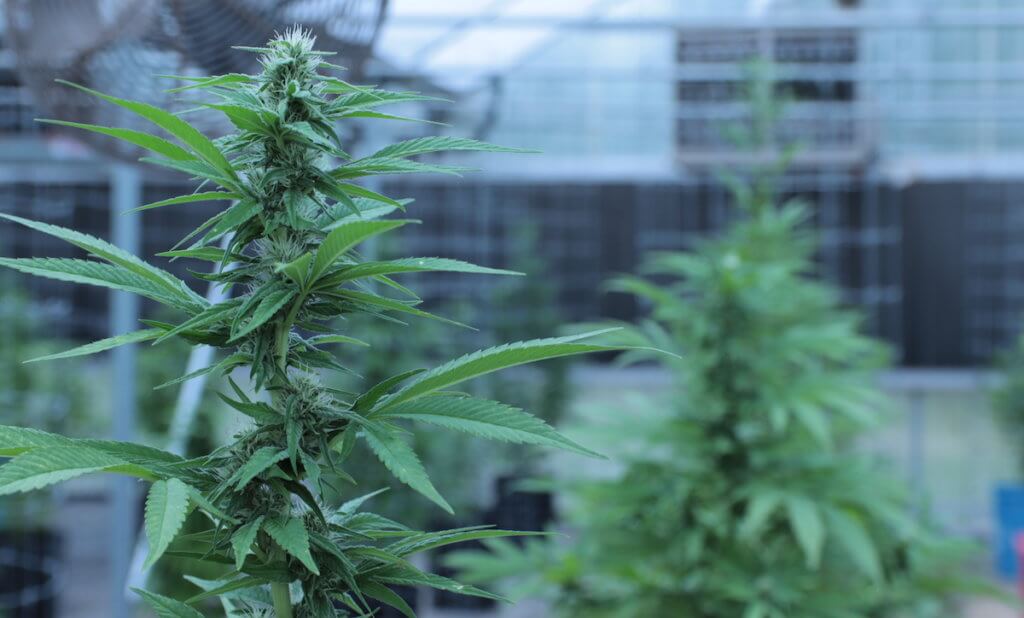 Johnson recently started two new businesses that accept medical marijuana companies as clients: the law firm Overman Legal Group and a consulting agency called Climb Collective. He said most Oklahoma dispensary owners and grow operators aren’t sitting on large amounts of cash, but that could change as the industry grows.

“Right now, it’s in its infancy,” Johnson said of Oklahoma’s medical cannabis industry. “Most people are putting every dollar back into their business. We aren’t to the point yet where it’s a giant stack of cash. More often than not, they are buying more product or opening new stores and acquiring new equipment.”

Employees at dispensaries are typically paid in cash. Even tax bills to the state are paid that way in most cases. All of those greenbacks create security issues for everyone involved, including patients. And making sure the money and inventory is safe costs money of its own.

“There is a need for constant security, and that’s an additional expense,” Johnson said.

While marijuana’s Schedule I status with federal authorities limits access to banking, there are ongoing efforts to fix the problem.

HR 1595, otherwise known as the SAFE Banking Act, aims to do just that. It would create protections to financial institutions and service providers like insurance companies who want to do business with the marijuana industry.

The legislation is supported by all 50 state banking associations, as well the National Cannabis Industry Association.

“The Safe Banking Act has been our priority legislation for several years,” NCIA communications director Morgan Fox said. “This is a huge issue beyond the obvious public safety that comes with the cannabis industry where, often, businesses operate on a cash-only basis.”

Symcox said First Fidelity is in favor of the SAFE Banking Act.

“The federal government needs to relieve that situation because it’s not safe to have large amounts of cash in our communities,” Symcox said. “It invites crime, and changing the laws would also provide for greater transparency. It’s something that really needs to be addressed.” 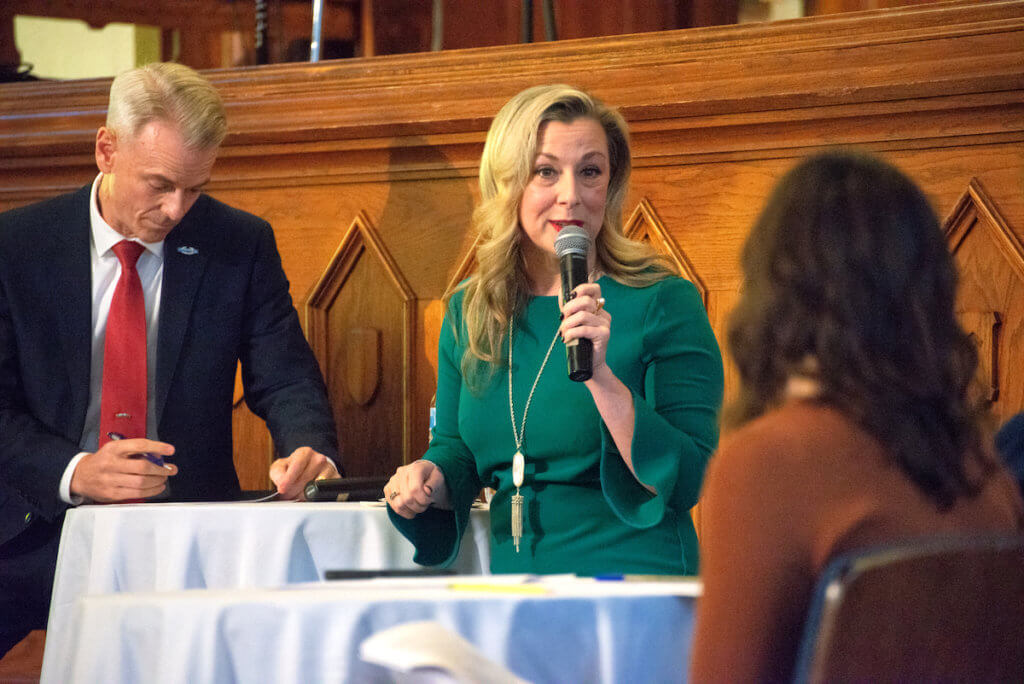 One of those co-sponsors is freshman U.S. Rep. Kendra Horn (D-OKC) who believes it’s time for clarity for those involved in the industry. She stands alone among Oklahoma’s congressional delegation. Rep. Markwayne Mullin has publicly opposed the SAFE Banking Act.

“To be honest with you, it would probably pass the House — just about every Democrat would vote for it and probably 30 to 60 Republicans would vote for it,” Mullin said in April, according to the Muskogee Phoenix. “I don’t know what the Senate would do — I heard the Senate probably wouldn’t pass it, but the president said if they did he might be open to it.”

The rest of Oklahoma’s delegation, including Sen. Jim Inhofe and Sen. James Lankford, actively opposed State Question 788 and have not appeared to signal public interest in the Safe Banking Act or its senate counterpart, co-authored by Colorado Republican Cory Gardner.

“Most states have legalized medical marijuana, yet federal law prevents banks from working with cannabis-related businesses,” Horn said in a statement provided to NonDoc. “Keeping our banks out of this industry endangers public safety and stifles local businesses. I am a co-sponsor of the bipartisan SAFE Banking Act because it respects states’ rights and provides clarity for the banking industry.”

So far, 33 states have legalized cannabis for medical use but have no ability to override federal law when it comes to banking.

“Legislatively there’s really nothing that can be done on the state level,” Beverage said. “That’s why it’s important to look at other ways. That can be removing it from Schedule I status, or creating laws that protect banks that want to bank the medical marijuana business.”

Beverage sees the SAFE Banking Act as a good way to address a problem without fundamentally changing drug policy.

“It creates safe harbors for banks and credit unions without having to be concerned about whether or not the banks and their employees will be criminally prosecuted, but it wouldn’t change the status of marijuana at all,” he said.

‘It boils down to the local U.S. attorney’

Horn believes even the SAFE Banking Act doesn’t go far enough, however. Ancillary issues like medical research into marijuana are limited by its federal status.

And its Schedule I status has other ramifications beyond access to banking.

“Insurance companies won’t cover it,” Fox said. “And, by and large, it isn’t covered by Medicaid or Medicare. That impacts low-income patients. And even though there haven’t been any efforts to crack down on legal businesses, it’s always a possibility.”

There is at least one bank in Oklahoma doing business with the medical marijuana industry. Ultimately the decision on whether or not to bank a medical marijuana business comes down to a judgment call, which is something laws like the Safe Banking Act would clarify.

“It boils down to the local U.S. attorney,” Beverage said. “If he or she decides they’re not going to go after these mom and pop operations and continue to focus on large-scale illegal drug activities, that’s one thing. But even then, you still have a judgment call to make as to whether or not you want to bank the business.”

In Beverage’s conversations with those in the Oklahoma banking community, the common theme has been extreme caution.

“Most of those I talk to don’t want to get within 10 miles of it right now,” he said. “There’s just too much uncertainty.”

In the end, the only way to remove risk for everyone might be revisiting marijuana’s Schedule I status. Currently the U.S. Drug Enforcement Administration classifies cannabis alongside heroin, LSD and ecstasy. Cocaine is Schedule II, alongside powerful narcotics like Oxycontin.

“It is a panacea for most of the industry’s problems,” Johnson said of changing the federal status of cannabis.

Public opinion may rule in the end

Marijuana for medical and recreational use is more popular than ever before. In 1990,just 16 percent of Americans surveyed believed marijuana should be legal, according to a Pew Research poll.

Illinois became the 11th state to legalize recreational cannabis when its legislature voted to end state prohibition in May.

“Things are definitely moving in the right direction,” Fox said. “I think there’s a serious possibility we can get the SAFE Banking Act this year.”

Fox said public opinion has helped to move cautious politicians toward reform and may force those hostile to reform to give up the fight eventually.

“A lot of politicians are finally starting to realize there’s huge support for it,” Fox said. “It would be a huge blind spot not to acknowledge that. The simple fact is Americans are done with prohibition.”

The banking and cannabis industry might seem like unlikely allies on the surface, but both see the need for problem solving.

“We have to deal with it,” Beverage said. “You just can’t turn a blind eye, and that’s what Congress has done. It’s frustrating to us.”