OK Is Looking For Ways to Stop Marijuana-Impared Drivers

As Oklahoma works to implement medical marijuana following the passage of State Question 788, law enforcement is working to establish ways to field drivers under the influence of the drug.

But finding a solution may not be easy.

Agency leaders say funding is an obstacle, and at the same time, defense attorneys say a state law could further complicate the issue.

Cody McDonell, spokesman for the Oklahoma Highway Safety Office, said the agency is exploring ways to screen drivers who are under the influence of marijuana. 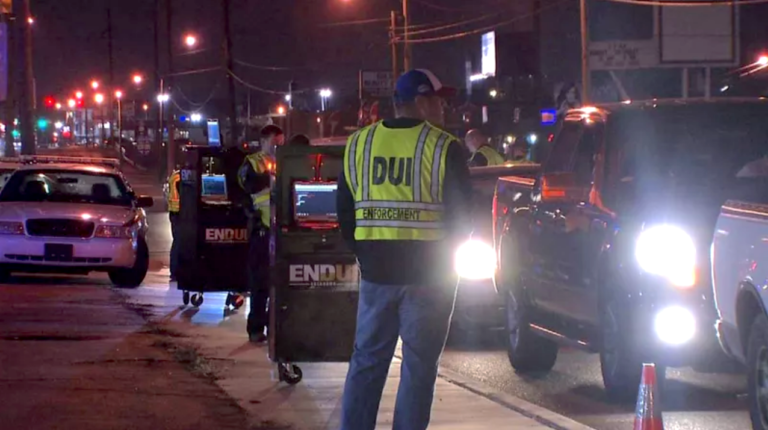 Oklahoma is looking for funding to implement tests to nab marijuana-impaired drivers.
The state has federal funding for programs centered around people drinking and driving. Photo courtesy of NewsOn6.

The state is considering a roadside test that would allow officers to swab the inside of drivers’ mouths to check for the presence of THC, the component found in marijuana that gets people high.

Early plans for the test would not measure how much THC drivers have in their system, but would would give officers a “yes” or “no” on whether THC is present. A “yes” would give the officer probable cause to perform further testing on blood, urine or saliva.

McDonell said the mouth-swab test was initially projected to be implemented in agencies by the end of this year, but that is starting to look more unlikely.

“It’s very expensive,” he said. “Especially to implement around the state.”

Driving under the influence is illegal in all states, but it’s nearly impossible to know when a person is too high to drive from a test. Like most states, Oklahoma does not have an established “per se” level for THC in marijuana, such as the 0.08 percent limit for alcohol.

The law bars people from getting behind the wheel with any amount of a Schedule 1 drug in their system. The feds have classified marijuana as a Schedule 1 drug, along with heroin and ecstasy.

When an officer has probable cause to believe a driver is under the influence, they may order a blood, urine or saliva test. Under state law, those tests also check for “metabolites” found in Schedule 1 drugs, such as marijuana, that can stay in a consumers’ systems for days or even weeks.

Chad Moody is an Oklahoma-City based lawyer who has dubbed himself “The Drug Lawyer.” He specializes in cases involving marijuana.

He called Oklahoma’s laws on driving under the influence of drugs “nonsensical,” pointing to how long it can take marijuana to completely leave someone’s system.

“As long as it (the law) is written that way, it will make any medical marijuana user who drives within 30 days, any detectable amount, automatically DUID (driving while under the influence of drugs).”

Oklahoma isn’t the only state with metabolite laws in the books.

Blake Johnson is an attorney in Oklahoma City who has studied metabolite laws in Oklahoma and other states. He said under those laws, a driver can be arrested for a DUI weeks or months after consuming drugs.

Oklahoma expanded its DUI liability laws in 2013 to include drivers who have metabolites from Schedule I drugs in their systems. Those metabolites stay in someone’s system long after the intoxicating effect expires.

Johnson said the law has been challenged in other states, but those challenges have been mostly unsuccessful. Opponents of the law are more likely to have luck changing it through the Legislature than in courts, he said. 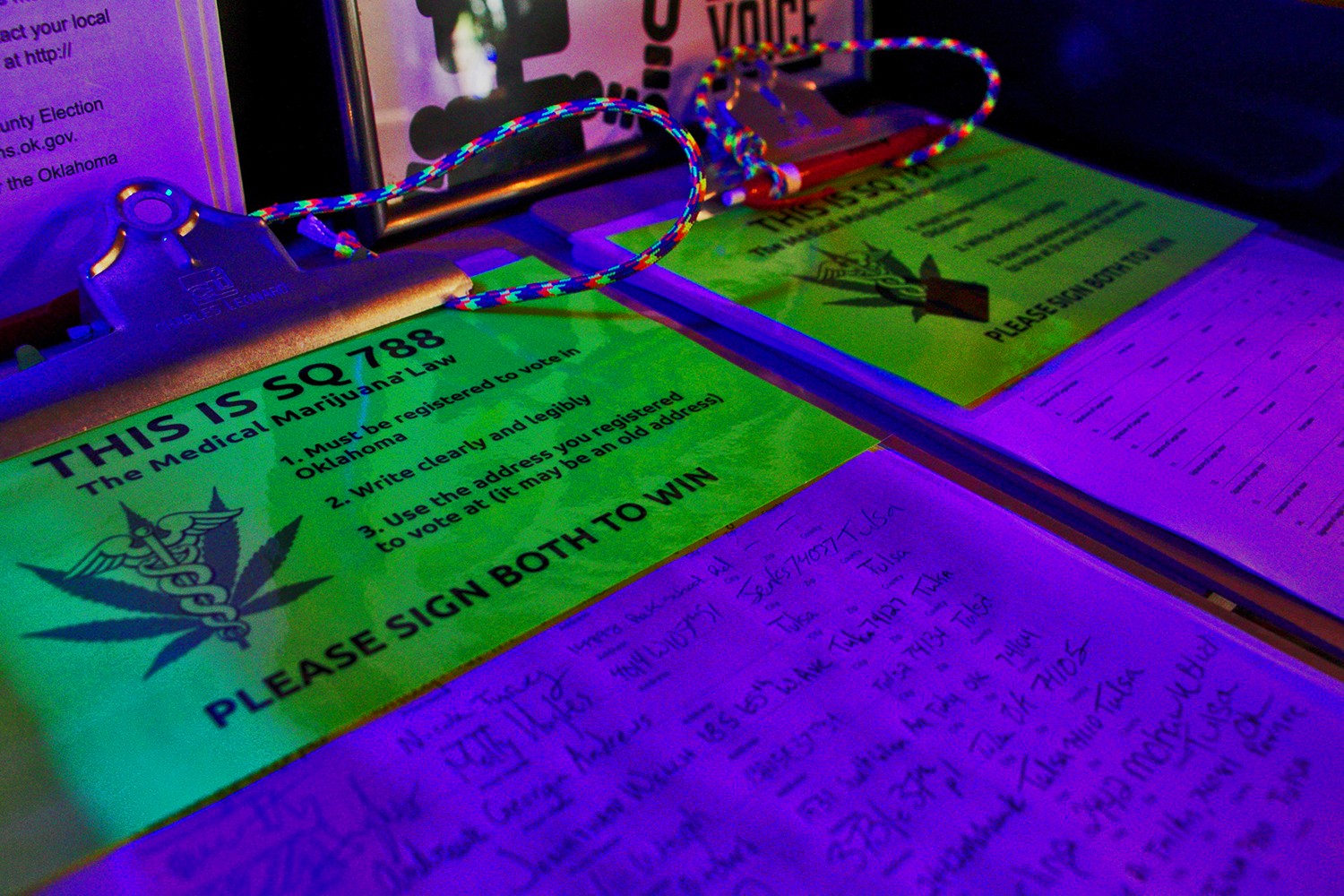 A petition to legalize medical marijuana sits under black lights at The Gypsy Coffee House in Tulsa’s Brady District. DYLAN GOFORTH / The Frontier

No additional funding for law enforcement

Steve Emmons is the executive director of The Oklahoma Association of Chiefs of Police, which opposed SQ 788. He said his board is concerned about seeing an increase in car wrecks and fatalities tied to drivers impaired by marijuana.

“The problem with all of this is there’s no new resources or revenue for law enforcement or agencies,” Emmons said. “So what you’re going to see here is a potential increase in accidents, which is going to tap into the resources time-wise for officers being on the scene of accidents.”

Emmons said once law enforcement agencies begin using new tests to stop marijuana-impaired drivers, they are likely to be challenged by defense attorneys. There will also be long periods of waiting for courts to respond and make a ruling, he said.

Kevin Behrens is the director of the state’s Board of Tests for Alcohol and Drug Influence, which develops rules regulating roadside breath testing and breath testing devices.

Behrens said rules the board approved for the mouth-swab tests went into effect last September, but it’s important to note officers have to establish a driver is impaired before they use the test. He also noted roadside tests do not screen for metabolites.

Behrens said he doesn’t believe any agencies are using or purchasing the tests, yet. He stressed the tests are not used to put people in jail for drugs.

“I think it’s important to note these are not just randomly implemented by law enforcement officers,” he said. “The impairment is still the problem.

“They’re not pulling grandma over and sticking a swab in her mouth. These tests are just tools to aid in the investigation.”

When it comes to car crashes and fatal wrecks tied to marijuana use, Oklahoma doesn’t know how big of a problem it has. The state does not yet track crash data linked to marijuana only.

However, leaders at the Oklahoma Department of Public Safety say there’s reason to be concerned. McDonell said the state has seen anecdotal evidence for wrecks linked to marijuana use.

McDonell said the department is working with other state agencies, such as the medical examiner’s office and law enforcement, to pull marijuana-specific data together.

Oklahoma law enforcement agencies reported 1,037 drug-related crashes in 2016, according to data from the state’s Highway Safety Office. Of those, 121 were fatal. That data includes illegal and prescription drugs.

The state Health Department updated its draft of proposed emergency rules for medical marijuana on Sunday. The rules would require sellers to place a warning on the drug’s package that states, the “Use of marijuana and medical marijuana products impairs your ability to drive a car or operate machinery.”

The Oklahoma Department of Safety is looking for ways to fund an initiative, but some federal grants must be used for specific causes, such as programs aimed to curb alcohol-impaired driving, McDonell said.

McDonell said the agency is developing fliers and brochures for dispensaries. He said the agency is looking to other states, such as Washington and Colorado, to see how they have campaigned to discourage people from driving under the influence of marijuana.

Oklahoma has historically geared its public-safety campaigns towards preventing drinking and driving, with programs such as ENDUI.

The state’s Highway Safety Office is now working to change the public’s perception that driving while high is dangerous, McDonell said.

“We really just want to make sure, we’ve had a lot of feedback on social media, saying it’s legal to smoke marijuana now, so I can do whatever I want,” he said. “It might be legal for some people under the right circumstances, but it is not legal to drive under the influence under any circumstance.

“Marijuana does cause impairment and you will be arrested for DUI.”