One of Oklahoma City’s oldest law firms is jumping into the state’s newest industry with both feet. 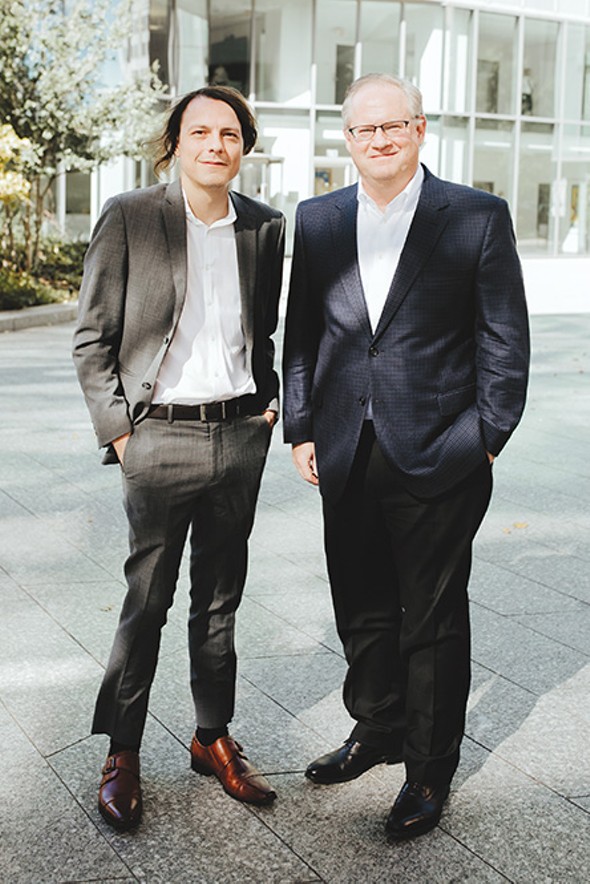 J. Blake Johnson is dressed in a black T-shirt and his jeans are tucked into a loose pair of high-tops. His hair blows across his face in the Saturday afternoon wind on a bar patio and he looks like the kind of guy who will be taking the stage with his band later that night. Instead, he’ll grind it out mulling complex legal issues.

Johnson, 33, is a fourth-year associate at Crowe & Dunlevy, an Oklahoma City law firm founded in 1902. A new kind of law requires a new type of lawyer, and he has quickly established himself as its public face.

Johnson is already no stranger to the spotlight. Since he began practicing law in 2015, he has represented a number of clients who have received their fair share of public attention, including former University of Oklahoma running back Joe Mixon and Oklahoma City band Hinder.

He watched the marijuana industry grow as the legality of cannabis slowly began to shift. Johnson noticed that advocates in other states were using citizen petitions to get referenda on ballots. Then those ballot measures began passing, even in states where they had previously been voted down.

“That’s when I think the whole game changed. We had a decided shift in public opinion about this issue years ago, and often legislatures are slow to catch up with public opinion,” Johnson said. “Plenty of states that you don’t think as Oregons or Californias on these kinds of issues all flipped. I became pretty confident at that point that it would never lose again at the ballot box.”

When Oklahoma State Question 788 gathered enough signatures to make the ballot, Johnson staked his professional reputation on it passing. At first, he faced plenty of skepticism. In meeting after meeting, his message remained the same.

“This is coming, and when it comes, an entire new industry is going to be birthed into existence overnight,” Johnson said. “We’d be behind the eight ball if we didn’t get out in front of it as soon as possible.”

There were a lot of questions. Will there be business? Will this conflict with current clientele? Is it ethical?

“It’s the nature of a big firm that change happens slow and that there are a lot of considerations. … There were very justifiable reasons that plenty of people were very concerned when the young associate said, ‘Let’s get into the cannabis industry,’” he said.

The pitch worked. Though the group officially formed in September, Johnson said he and his colleagues have been working toward it since last fall.

The group has not yet filed any litigation in state or federal court but has been meeting with local decision makers and advocating privately on behalf of a clientele that is rapidly expanding.

“The ground is just moving under our feet so rapidly and in such a complex way that there isn’t a well established doctrine for practicing this kind of law,” Johnson said. “Whichever [lawyer] claims to be an expert, that’s the one you shouldn’t hire because there’s no such thing, not just in Oklahoma, but really, there’s no such thing in America yet.”

“Blake was kind of the brain child and the mastermind behind seeing 788 on the horizon, but I think that Evan Way and myself were probably the two people right behind him who believed in what he was preaching to the firm,” Wilson, 29, said.

While Johnson spends more time meeting with clients and working out the big-picture issues, Wilson’s expertise is in data handling, database building, strategy and implementation.

“If Blake is a rock star, I’m certainly the chart star,” Wilson said.

Johnson lived for several years in California’s Bay Area. Wilson spent time as a consultant in Washington, D.C. Both returned to Oklahoma for law school.

“I think that kind of colors our backgrounds too. We have both spent time in places where the stigma doesn’t exist as much as it does here,” Wilson said. “People are kind of coming around to the idea that this is something that we’re going have to live with and deal with and try to find a way to regulate it.”

With 57 percent of voters on one side of the issue and 43 percent on the other, the realities of legal medical marijuana industry have made for strange bedfellows.

“It is kind of indicative of the industry writ large that we’ve had clients come in the door of our firm who are people who would otherwise never come into our firm,” Wilson said. “People who have always thought of themselves as kind of like social outcasts. The hippie types who want to get into this because they’ve been in the culture for so long, and then we have established clients.”

With nearly 25 years of experience in multiple facets of the law, Fisher brings a lot to the table.

“I’m the adult in the room, if you will,” Fisher said.

He was also one of the more skeptical members of the firm about the future of the industry in the state.

“It was more than a year ago when Blake started talking about this. … I said, ‘Dude, you’re smoking weed. It’s never going to happen in Oklahoma,’” Fisher said, laughing.

But it did happen, and not by a small margin. Medical marijuana in the Sooner State is moving forward at breakneck speed, with product expected to hit shelves within weeks.

“Rarely do you have the opportunity to have an industry sort of pop up overnight. It’s more than one of those pop-up stores that you have around Christmas time. This is a popped-up industry that’s going to be around for a long time,” Fisher said.

“This is the fastest growing industry in North America,” Johnson said. “The compound annual growth rate for cannabis operations in North America is growing at a rate faster than broadband internet in the 2000s, than mobile phones in the ’90s.”