Extract sits down with its legal analyst, J. Blake Johnson, to share a smoke and a conversation about the future of Oklahoma’s cannabis prisoners. 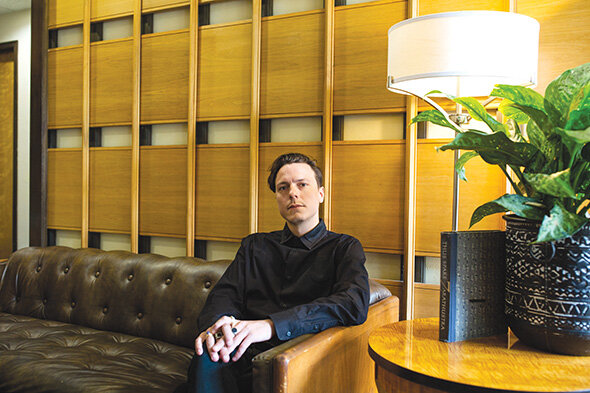 Extract: So I was hoping we could talk about criminal justice.

Johnson: It is an important topic.

Extract: Yeah, and it is one I have heard you speak about publicly several times, but you were hesitant to write about it when I asked you to do so. Why?

Johnson: I guess because it is an issue that is extremely personal to me and also very awkward. I am still trying to reconcile my place in the cannabis industry with my conviction that none of us should be profiting off cannabis while others are imprisoned for cannabis-related crimes. I am very proud of my work in the cannabis industry, but it also generates a lot of anxiety and, frankly, a lot of guilt for me. Every time I have tried to condense my thoughts into a structured essay, as you have asked me to do, I have been frustrated by the basic impossibility of separating myself from my own place in it all. I just do not think I am capable of responsibly analyzing the scandal in light of my direct interest in the industry.

Extract:  What do you mean by the “scandal?” What is it that makes you feel so awkward?

Johnson: As you have reported, Oklahoma — in just one year — has enrolled the greatest number of medical cannabis patients in the world, as a percentage of its overall population. But Oklahoma simultaneously enjoys a more ignominious distinction — we also house the largest per-capita prison population on the planet. How does the Oklahoma cannabis industry — booming with economic opportunity and, in my experience, fueled by unrivaled idealism — reconcile these incongruous realities? Last month, Oklahoma hosted its first High Times Cannabis Cup. It was an exciting milestone for the community, but thousands of people were unable to attend. Neither the excruciating heat nor the seemingly endless lines to enter kept them at home — thousands of people were unable to celebrate with us because they are prisoners of the state. I fear we are so excited about the freedoms we have won that we are oblivious to those who are still denied the most fundamental kind of freedom.

Extract: And this conversation would be incomplete if we did not acknowledge that the state’s jails and prisons are disproportionately populated by people of color.

Johnson: Yes, and similarly so if we did not acknowledge that the cannabis industry is comprised of largely white participants, especially at the investment and management level — that is to say, the money generated by cannabis is lining mostly white pockets. So we have thousands of black and brown bodies filling our jail cells and then thousands of white people moving into new tax brackets off the legal sale of the same products that got their neighbors locked up.

Extract:  Do you feel like that presents a dilemma for cannabis industry participants or imposes some kind of obligation on them?

Johnson: Certainly. I do not want to sound too moralistic, but certainly it should pose very challenging questions to those of us who are directly profiting from this industry.  And I fear we are neglecting those questions.

Extract: To play devil’s advocate, what does one thing have to do with another?

Johnson: Well, it is easy enough to highlight the basic injustice — some folks are locked up for the same behavior from which others openly profit. That part is obvious. But another undeniable — and much more disturbing — observation follows from this:  The opportunity inherited by our industry — the huge profit margins and protectionist state laws — are all made possible by decades of criminalization. To be more direct, my ability to make a career off cannabis — and the ability of my clients to do the same — is in no small part because generations of those who preceded us were demonized, prosecuted and incarcerated.

To me, it seems obvious that there is a direct, causal relationship here: Our opportunity to profit exists because so many others suffered and continue to suffer.

Johnson: It is. And I think that is why it is so tempting to just ignore it. … Though we might lack access to a lot of traditional financing, the cannabis industry is nonetheless subsidized in significant part by an historical privilege to which we are often oblivious. That is troubling.

Extract: It is troubling. How should we address it? What solutions do you see that might redress the injustice you are describing?

Johnson: Well, now you are pushing me to my limits. I do not know whether there is a panacea, and I am sure I am not qualified to announce it in any event.

I think, however, that decarceration has to be an overarching policy objective for the cannabis-reform movement, which remains one of the most mobilized and energized grassroots political movements in Oklahoma. Our state Legislature, led by Representatives Echols, West and Dunnington, has taken an important first step by passing legislation to apply retroactively State Question 788’s penalties for low-level possession of cannabis. But I think we have to make a much broader demand: No person should serve time in jail or prison for the possession of cannabis in any quantity. All persons currently serving sentences for such crimes should be released.

Johnson: Yes. We have reached the point where I do not believe we can articulate a coherent penological interest in incarcerating folks for even the most egregious cannabis-related crimes. We have locked up generation after generation — removing parents and siblings from homes and neighborhoods, devastating entire communities. And for what? What societal good are we promoting? Keeping cannabis off our streets? We just created a billion-dollar industry to make cannabis available. It simply is not defensible anymore.

Extract: And, clearly, just getting or keeping people out of jail is not enough, right? I mean, prohibition has inflicted real wounds that are not so easily mended.

Johnson: Absolutely. We have to ensure that folks who have had so much opportunity ripped away from them are provided real support. That is the industry’s imperative.

Johnson: Oklahoma’s cannabis industry has amassed significant resources and influence in an incredibly short period of time. If we do not devote ourselves to addressing the inequities that made it all possible, we truly do not deserve the opportunity we have inherited.