Hempfest, a concert and celebration of hemp that was to feature Snoop Dogg, never happened. Now lawsuits are flying. 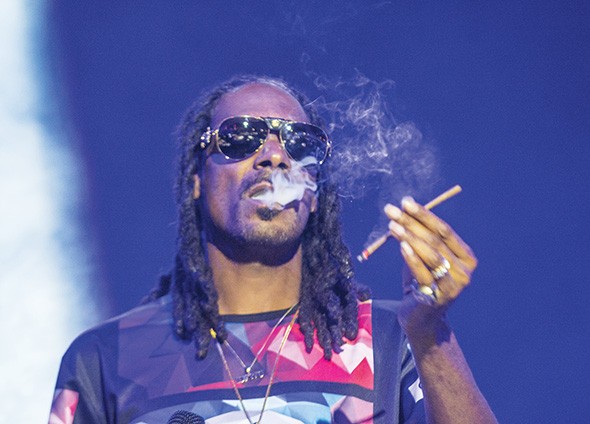 Snoop Dogg, shown at the 2015 Life Is Beautiful Festival in Las Vegas, Nevada,
was supposed to be the headliner at 2018’s Hempfest in Oklahoma City. | Photo provided by bigstock.com

Organizers of a music festival, one that promised Snoop Dogg but never materialized, are being sued by a sponsor. In addition, a separate lawsuit against one of the same companies over a failed CBD deal was filed the same day.

Hi-Tunes is based in Seattle, Washington, though both it and Hempfest have offices in Oklahoma City and both deals occurred in Oklahoma County, according to the petition.

Hi-Tunes owner Scott McKinley said he is from Oklahoma but lives and works in Washington. He is involved in Seattle Hempfest and offered to start a local variation with Oklahoma Health and Wellness Festival LLC, which is owned and operated by Baron Keith Hopgood. McKinley confirmed that he was involved in the deal with Top Shelf but said he has no business offices in Oklahoma.

“Defendants advertised themselves as the principal organizers and operators of Oklahoma Hempfest, a three-day educational event and outdoor entertainment festival taking place in Oklahoma City on September 8-10, 2018,” the petition reads. “According to marketing and fundraising materials, Oklahoma Hempfest is affiliated with ‘Seattle Hempfest,’ an annual music festival in Seattle, Washington. Boasting Seattle Hempfest’s 27-year history of operations, and those of affiliated Hempfest events in over a half dozen other states, Defendants promised Oklahoma Hempfest would be an ‘enormous annual event.’

“Oklahoma Hempfest’s purported mission was to improve public understanding of the hemp plant’s various applications and benefits, and the event promised to include an ‘imposium’ featuring exhibits, seminars, and panel discussions to be attended by ‘political figures,’ ‘police representatives,’ ‘doctors,’ ‘farmers,’ and various ‘industrial representatives.’

Defendants approached CBD Plus USA for a sponsorship in late July 2018 and assured the company that the festival was going forward up to six weeks before the event date, the lawsuit said.

Organizers provided marketing materials that claimed up to 45,000 people from Oklahoma and surrounding states were expected to attend the event at Lost Lakes Entertainment Complex, and more than 250 vendors were expected to showcase their products and services at the event, according to the petition.

CBD Plus USA invested $20,000, expecting in return, among other things, two tables near two stages, a banner on two of the stages, its logo on multiple marketing and publicity items and that Snoop Dogg would perform while wearing a CBD Plus USA shirt, the petition states.

None of those things came to pass.

“Oklahoma Hempfest did not happen on September 8-10, 2018,” the lawsuit states. “There was no three-day outdoor music festival. There were not four stages surrounding three lakes. Snoop Dogg did not perform, nor did 99 other acts. Defendants instead hosted ‘The Road to Hempfest,’ a single-day indoor event in a conference center at the Sheraton Hotel in Midwest City. CBD Plus received none, or nearly none, of the benefits it was promised.”

When CBD Plus USA requested a refund on their investment, it was instead offered a counteroffer of a $15,000 refund if it pledged to purchase “health and wellness” products from the defendants, the petition states.

CBD Plus USA is seeking a full refund of its $20,000 as well as punitive damages and attorney fees on claims of fraud and breach of contract, according to the lawsuit.

Several Oklahoma news organizations publicized the event with a poster circulated online showing Snoop Dogg as the headliner. Snoop Dogg himself posted an event poster on June 18, claiming that the concert would be free with registration. The website for Oklahoma Hempfest no longer exists.

The second lawsuit alleges a bait and switch involving the purchase of CBD oil after owners of Top Shelf were approached by Hi-Tunes.

In exchange for $72,600, Top Shelf expected to receive 8 kilograms, or 17.6 pounds, of CBD isolate within 10 days, and $12,000 in cash within 30 days. The deal was also supposed to include a direct line of communication to the supplier of the CBD isolate. The purpose of the last provision of the agreement was to confirm the price of the isolate, its legality and quality and to create a supply line from the source to Top Shelf, according to the petition.

Purportedly, none of these things happened and a clause in the contract provided for a full refund if Hi-Tunes failed to meet its end of the bargain, the petition states.

“Hi-Tunes failed to perform all or nearly all of its obligations under the Contract,” according to the petition. “The CBD isolate it delivered to Top Shelf was of insufficient weight and/or inferior quality to be sold at fair-market value. Hi-Tunes did not pay Top Shelf $12,000, or any amount, within 30 days of the Contract’s execution. And, Hi-Tunes never provided any proof of purchase or put Top Shelf in communication with the CBD isolate’s source.”

Top Shelf was refunded $4,000 in September with the promise that the rest was to follow. The petition states it never did. Top Shelf is seeking the full return of its investment, plus interest and attorney fees.

“We’ll let the petitions speak for themselves as to the facts, and we hope to resolve this without a protracted dispute,” said J. Blake Johnson, attorney for the plaintiff.

In an interview with Oklahoma Gazette, Hopgood said that the lawsuit is without merit.

“At the end of the day, it’s a frivolous suit,” Hopgood said. “If Mr. McKinley is denying the fact that he’s part of this conversation, which he benefited from any and all dollars that came in, then that’s a lie. The only reason why they couldn’t make a payment to Oklahoma Hempfest is because the bank would not allow you to open up an account in the name of Hempfest.”

McKinley acknowledged that he still owes Top Shelf $8,000 but said other obligations have been met and he wants his name cleared in connection with the Hempfest debacle and Hopgood.

“[Hopgood] has 10 years of con artist work all over Oklahoma, and he’s very famous for being a con artist there, and I had no idea about this when I signed up with him,” McKinley said. “And then after everything started happening, I looked up his background. I was embarrassed like crazy, and I separated from him completely. And he went and started a company name just like mine in Oklahoma to keep on making people think it was me. I went and did video interviews everywhere. I was the face of it, and that’s why it’s just really embarrassing. Being from Oklahoma, to have all my friends see my face on it and then have the whole festival turn out so bad and just fail so badly. And then now I’m getting sued by it publicly, it’s kind of like hurting my face in my hometown.”

Records show Hopgood is a named defendant in two civil suits pending in Oklahoma County District Court. One is a breach of contract lawsuit brought by another company against Hempfest, and the other involves more than $46,000 for gasoline.