HB2612 was signed into law by Gov. Kevin Stitt but has been questioned and now challenged in court.

Five days after House Bill 2612 was signed into law, it has a legal challenge.

The petition was filed on behalf of plaintiff Leslie Ann Collum in Oklahoma County District Court on March 19.

Collum is a medical marijuana license holder, registered nurse and the owner of Painted Nurse Apothecary, 3017 N. Lee Ave. She is suing Oklahoma State Department of Health and its interim commissioner, Tom Bates.

The lawsuit alleges that HB2612, commonly called the “unity bill,” violates the Oklahoma Constitution. The law is set to take effect 90 days after the Legislature adjourns. 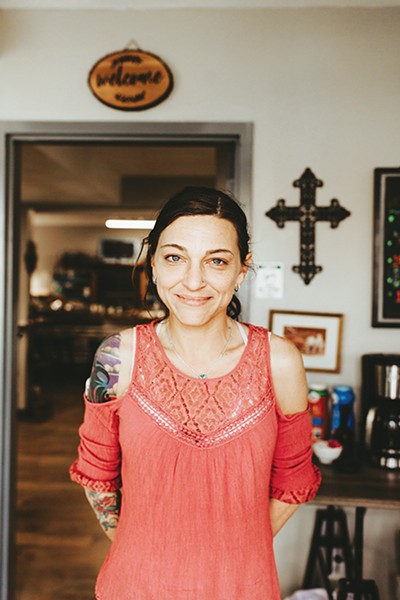 The petition argues that the law’s provisions are vague and do not give commercial license holders adequate knowledge of what acts may subject them to disciplinary actions or what those actions might be. The law would violate due process because it is unclear what could subject Collum to lose her business license or how she could defend herself, the petition claims. The petition also argues that the law violates equal protection laws because Collum has a recognized disability and it singles out an entire class of people for different treatment. HB2612 should be permanently voided for vagueness, the petition claims.

A temporary injunction and restraining order are requested until the court rules.

“I’ve lived here all my life, and I’ve seen it time and time again,” Collum said. “It’s time to fight. It’s time to speak our voices. It’s time to put our feet down and tell the state we won’t put up with it. We aren’t going to take it. This isn’t what we wanted. It isn’t what we voted for. I thought [State Question] 788 was supposed to protect any state license that I held. So now safety-sensitive? Are you going to take away my registered nursing license because I’m a medical marijuana patient? Do you think I still don’t have the capacity to practice as a registered nurse? … If I’m a medical marijuana user and I use medical marijuana in my off time, not within, say, four to eight hours of arriving to work as you would see standardly if you were prescribed a narcotic and you were employed, so why do we treat marijuana differently from Oxycodone?”

Cannabis activist John “Old School” Frasure worked jobs that would be considered “safety-sensitive” his entire life before retiring due to medical disability. He was prescribed opiates and benzodiazepines for 12 years before turning exclusively to cannabis for treatment and does not like that provision of the bill.

He also argues that any job could be interpreted to fall inside that exception.

“Every job. Working at McDonald’s around all that fry grease. Flammable material. Knives. Safety-sensitive,” Frasure said.

Another part of the law Frasure takes issue with is the requirement of a waste handler for discarded plant material.

“When you go into a dispensary, if they’re a good budtender, they’re going to break that off and give you nothing but bud,” he said. “So at the end of the month, what have we got? We’ve got a handful of stems. Now you’re going to charge somebody $2,500 to have a disposal license to throw this handful of stems in a compost pile. Because what are you going to do with it? Hazmat? It’s stems.”

J. Blake Johnson conferred with lawmakers about how proposed reforms would affect the industry. He said the need for additional regulation after SQ788 was undeniable but sympathizes with critics of HB2612, which he described as “an inelegant solution” that will create significant uncertainty within the industry.

“In one of the very early sections of the law, it establishes the Oklahoma Medical Marijuana Authority. Well, that’s already established, but it purports to establish it for the first time. And then it assigns to the OMMA certain enumerated authorities. Well, just a few sections later, it repeats most of those authorities and rights and powers and responsibilities, but it gives them to the Department of Health writ large, and I think, gives very, very broad power to the department writ large. If the language of the bill uses both ‘department’ and ‘authority,’ then we should assume that there’s some difference between those. So where the authority of the OMMA and the department itself overlap, again, it’s not apparent to me to whom this authority is supposed to be assigned,” Johnson said. “It’s Section 14 that purports to more or less restate much of 788, and where there are differences, however slight, it creates a bit of an interpretive dilemma because we have two different sections of statutory law ostensibly governing the same activity. …  It restates many of the same requirements that are included in 788 for licensing, but it appears to include a few additional ones. So, for example, it requires that before a license is issued by the department, the applicant must have obtained all relevant local licenses and permits issued by the municipality in which the commercial operation would be located. Well, first of all, many municipalities won’t issue those permits until you have a state license, but in any event, that’s an additional requirement that’s not included in 788.”

Another area of the law concerning residency could create problems, Johnson said. The section states that commercial license holders have to have lived in Oklahoma for the last two consecutive years or have lived in the state for five continuous years in the past 25 years.

“So if I’m a 25-year-old who lives in Los Angeles, I was born in Oklahoma, but moved to California when I was 6, then for the purposes of the unity bill, I am an Oklahoma resident and I may own a medical marijuana license. If, however, I moved from California to Oklahoma in June of 2018, in anticipation of this reform, have already obtained a license and am already operating a medical marijuana business actually living in Oklahoma, I’m not a resident and I can’t be a licensed medical marijuana operator,” he said. “I think there are a number of sections where the language is at best unartful and imprecise, and I imagine that there was tremendous pressure amongst the legislators to get something out, so it’s difficult to fault them for some of those inefficiencies but they exist. And I do think that they’re going to generate confusion and potentially some dispute about how the law should be interpreted.”

Read the bill at oklegislature.gov.