A requirement by the state legislature for cannabis businesses to have certificates of compliance filed with their application is causing headaches throughout the industry. 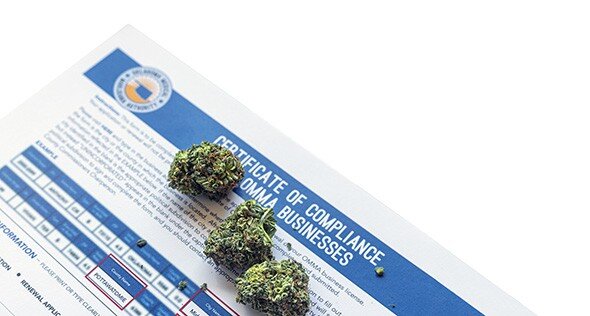 All Oklahoma cannabis businesses are now required to have a certificate of compliance. | Phillip Danner

Starting in September, all Oklahoma cannabis businesses are required to have “certificates of compliance” from the municipalities or counties in which they do business. However, it has left the deluge of companies who were among the first to apply for licenses fearful that they will lose them due to the short timeframe they have to acquire them.

The relevant portion of House Bill 2612, or the “unity bill,” reads, “A license … shall not be issued until all relevant local licenses and permits have been issued by the municipality, including but not limited to an occupancy permit or certificate of compliance.”

“Frankly, I expected it to be a bit of an ordeal. I urged — and I was not the only one who urged — to lawmakers that it would create significant bottlenecks in the application process if the certificate of compliance were required in advance of applying for a license, and I think that’s exactly what we’re experiencing now,” said J. Blake Johnson, founding partner of Overman Legal Group and Climb Collective. “The timing is a significant cause of the problem. ‘Unity’ took effect on August 29th, and I expect that lawmakers thought reasonably that providing the industry that extra time after sine die to get compliance matters in order would be advantageous, and I think that was a reasonable thought, but they overlooked, I fear, that if the rules took effect on the 29th, it would result in a situation where there was only a matter of days before the earliest licenses would be required to renew, the consequence being that there are new regulatory compliance components that didn’t exist early enough to provide industry participants sufficient time to get their affairs in order before their renewal application was due to be submitted.”

If there were minor problems in an application submitted in the short window before Aug. 29, such as a scrivener’s error, it would prompt a rejection and then the business would be prompted to submit a certificate of compliance when resubmitted. However, Johnson said OMMA has allowed, in many cases, those errors to be corrected without triggering the additional application requirements.

Another instance in which the process has been exceedingly simple is counties do not have the requirements that many municipalities do to attain that certificate of compliance.

“There are plenty of municipalities and counties that have taken a relatively laissez-faire approach to these businesses, and so, in many cases, those folks don’t have any clue what they’re being asked to provide. And that’s caused some confusion,” Johnson said.

For instance, some counties — like Johnston and Washita — have issued letters to businesses operating within their boundaries stating that they are in compliance, circumnavigating the issue altogether.“As of the date of this certification, Washita County has no planning or zoning commission or other body, and accordingly has enacted no building or zoning ordinances, safety, fire, electrical, plumbing, waste, or other codes, rules or regulations that would affect an applicant seeking certification from this County,” a letter certified by Washita County clerk Kristen Dowell reads.

However, large cities like Oklahoma City are where the stress and pressure upon the cannabis business owners is the strongest.

“In Oklahoma City, where there are a great number of applicants, what we’re dealing with is the city is actually incapable of providing the necessary inspections, permits, etc. in the time frame required for those folks to get their renewal applications in to the OMMA,” Johnson said.

The City of Oklahoma City first learned about the certificate of compliance requirement on June 5 and has worked to have a system in place to deal with them by Aug. 30, said Mike Miller, supervisor of inspection services.

“It is brand-new, and we didn’t have quite as much test time as what we would like to have, like we do with our normal programs, like just an electrical permit or mechanical permit or any other kind of business license that’s been in effect for long periods of time where we’ve had a chance to work out the kinks,” he said.

Miller said the city does comparable inspections for 110,000 to 120,000 businesses a year. He estimates that there are upward of 1,200 cannabis businesses operating in the city. The fee for the certificate of compliance in Oklahoma is $615 for a dispensary and $750 for a grower or processor. If a business is doing all three in one location, they can now expect to pay an extra $2,115 each year to conduct operations in Oklahoma City, not including the state license fee and other regulations such as food licenses.

“I know dealing with any municipality or any government agency for that matter, in a lot of cases, it’s not a fun event,” Miller said. “The reason why we do permits and, of course, the certificate of compliance now and everything else is for the safety of citizens. That’s why we exist.”

Miller said the city is not trying to be any more burdensome than necessary to get the certificates of compliance. After a request for a certificate of compliance, inspectors are usually on-site in one business day; however, the plan review portion of the inspection can take 10 working days for a remodel and 15 working days for new construction. There are currently 48 available inspectors in Oklahoma City.

“I reached out to all my inspectors and said, ‘Hey, we need to extend whatever grace we can because a lot of these people have gone out there and spent their savings on putting one of these businesses in,’” Miller said. “‘We need to try to help them be successful in that.’”

While many cannabis businesses are still rushing to renew their licenses and get the accompanying certificate of compliance, there might be one way to buy more time.

“It has been suggested to us that the easiest way to kick the can down the road at a minimum would be to submit the application absent the certificate of compliance, so as to get rejected, trigger the 30-day resubmission timeframe and, in so doing, buy ourselves several additional weeks to hopefully get our affairs in order with local government,” Johnson said. “I expect that for a lot of operators, this is going to be a significant cause of frustration going forward. To be clear, though, I don’t blame Oklahoma City or the OMMA for this bottleneck. It is a creature of state law. It is undeniably a part of the statutory law under which OMMA operates. The City of Oklahoma City had nothing to do with its creation, nor did OMMA. I think both of those authorities are probably experiencing frustration similar to what industry folks are experiencing. I don’t think they’re the cause of it.”