A past out-of-state warrant resulted in a local cannabis businessman spending nearly a month in jail without charges. 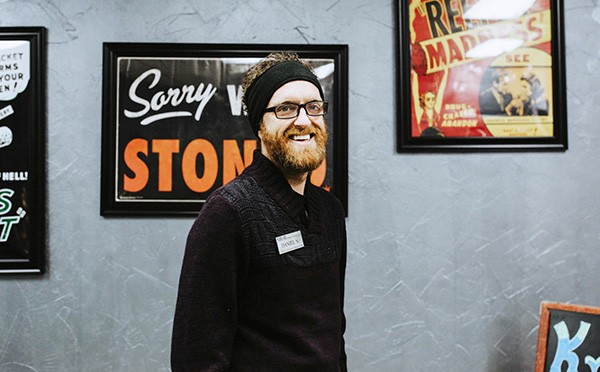 Daniel Newberg spent nearly one month in jail after his dispensary application got flagged over an out-of-state warrant. | Alexa Ace

Daniel Newberg expected to open his medical marijuana dispensary, No Rhyme or Reason Kratom Shoppe & CBD, after the paperwork went through in November. Now, he sees no rhyme or reason why his application cost him nearly a month of his life behind bars.

Newberg was in the process of converting one of his shops to a cannabis business. He got his Oklahoma Medical Marijuana Authority (OMMA) approval. He was cleared by Oklahoma State Bureau of Investigation (OSBI). Then his name landed on the desks at Oklahoma Bureau of Narcotics and Dangerous Drugs Control (OBN).

“They called me the week of Nov. 9th asking to inspect — like a pre-inspection for the dispensary,” Newberg said. “They just want to see where I’m planning on storing stuff in storage and if I have my safe. They understand that we could be in mid-construction. Most people are. It’s just one of the things that we had to do. So I was like, ‘Okay, yeah that’s fine,’ and I scheduled it for the 13th.

“That Tuesday, my business partner actually came to the 10:30 appointment. I didn’t think we’d all have to be there. They basically did nothing and they told him that they needed all the partners available. And they rescheduled it for later on that afternoon, and in the meantime, they confirmed that I would be there, but they also went to my grandparents’ house looking for me.”

Newberg said OBN agents also went to his other three stores looking for him before he arrived at the proposed dispensary location, 7910 N. May Ave.

“They walked in and immediately said that I had a warrant out of state in Tarrant County [Texas]. You know, ‘Put your hands behind your back,’” Newberg said.

It would be more than three weeks before he walked free.

Newberg was working for an apartment complex, and as part of his pay, was given a unit for free.

“I was young and dumb,” he said. “I accepted a payment for rent that wasn’t for me, and I had them write it to me, basically. Wrote it to my company. And it shouldn’t have been. And I was basically subleasing an apartment that was given to me for free and whatnot.”

Newberg flew from Los Angeles to Texas after he was charged. He said he pleaded guilty to a lesser offense and was given a two-year deferred sentence with some community service. He immediately paid the restitution — approximately $3,500 — and transferred the case to Oklahoma. He spent the next two years without incident and thought the case was concluded.

Because Newberg did not appear before a judge at the end of his probation, a felony warrant was issued for him out of Tarrant County. OMMA didn’t see it. OSBI didn’t see it. Oklahoma City police didn’t see it when they pulled him over less than two weeks before his arrest.

Newberg spent nine days in the Oklahoma County jail, where he waived extradition and was picked up by a third-party transport company on Thanksgiving.

“We traipse across Oklahoma and Texas for three days, picking up other inmates as we’re shackled hands and feet in the back of this, it looks like a dog-catcher van,” he said. “That’s how I keep referring to it. So it took us three days to go what would have taken me three and a half hours. I didn’t arrive there until that Saturday at 10 or 11 p.m.”

That was Nov. 25. When Newberg finally had a court date on Dec. 7, the felony warrant was dismissed, Tarrant County court records show.

“Apparently, there was a letter that they sent, and I guess it got sent back to them is what we found out at the court here recently about that final court date,” he said. “And, you know, all these years, I didn’t know. I thought I actually completed probation, otherwise I would have went down there and did it myself.”

He returned to a life in ruins. His business partners wanted to pull out. One of his stores in Norman had been forced to close. Employees were quitting and his sales were down. And his husband — who felt like Newberg had been hiding a criminal past — decided to separate from him.

“I’ve been an emotional wreck since then,” Newberg said on New Year’s Eve. “I’m just now getting back to normal, I think. You know, it’s hard. It was the most terrifying experience of my life; I know that. Some of the stuff that I saw in there was pretty ridiculous; the way they treated the inmates was inhumane. I feel like animals get treated better. You know, I think that’s gonna be an emotional toll on me for the rest of my life. And I can’t see a therapist because all my money is tied up right now. I’m trying to pinch pennies so this wasn’t all for nothing because I’m not gonna let them win, basically.”

OBN spokesman Mark Woodward said the bureau’s hands were tied in the matter.

“Because he applied with us and we did a background, it was our background that found that he had a felony warrant,” Woodward said. “We contacted Texas. They said, ‘Yes, if you have the opportunity to get him, we want him back.’ And, of course, on a felony, you’re commanded by the court. You don’t have discretion, like on a misdemeanor.”

“It’s not at all clear that [State Question] 788 intended to give OBNDD any authority whatsoever, and the statutes it created don’t reference that agency,” Johnson said. “788 gives the Department of Health regulatory authority over the industry, and the Board of Health has created a rule requiring licensees to register with OBNDD.”

Woodward said OBN has statutory authority to inspect anyone dispensing controlled substances, regardless of SQ788’s wording; they handle inspections like they would a pharmacy.

“Title 63 covers anybody who has registration from us who possesses, administers, dispenses controlled drugs, and they are nationwide,” Woodward said. “So because we’ve got distributors, registration and manufacture registrations from California to New Jersey who are registered with us. And so it’s natural for us to do a national search because we have registrants nationwide. It’s not to shut anybody out. We’ve processed close to 1,400 approved and denied eight. …  This is the first one that we’ve actually had an outstanding felony warrant on. I think 615 dispensaries have been approved.”

OBN is still approving licenses without inspecting their facilities first, Woodward said. But Newberg said they used that as a pretext to lure him in for an arrest.

While he was jailed, OBN also rejected Newberg’s application for the dispensary, records show.

“The company meets every requirement listed in the statute and already has its dispensary license from the OMMA. Daniel didn’t have a disqualifying conviction before, and he doesn’t have any new conviction as a result of this ordeal,” Johnson said.

Woodward told Oklahoma Gazette in October that OBN was “going to stay in [their] lane.” He said that is still the case, except in rare instances like these. Now that the warrant has been cleared, Woodward urges Newberg to re-apply.

“We’re not trying to stop anybody. Just do what 788 and OMMA rules say before you apply and you’ll be fine. … He didn’t leave with a choice but to deal with it because he came into our lane, so to speak,” Woodward said.

Like Newberg, Johnson sees no rhyme or reason for any of this.

“He sat in jail in two different states for nearly a month, missing Thanksgiving with his family, just to be sent back home,” Johnson said. “I just can’t imagine what law-enforcement priority or public interest was served here.”